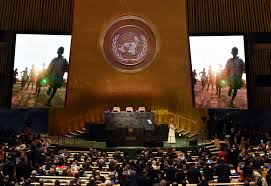 On September 26, 2015 the United Nations brought national and business leaders throughout the world to celebrate and encourage black and brown self-reliance and development .

The idea is to empower countries and people of the southern hemisphere, which consists of countries from Africa, Asia, South America, Latin America and Caribbean nations.

Countries who for hundreds of years have been dominated and oppressed economically and politically by western and northern nations.